People are often surprised to learn that I am dyslexic. They think that being dyslexic would prevent me from being a successful writer. What they probably don’t know is that other authors who are dyslexic include Gustav Flaubert, W.B. Yeats, Hans Christian Anderson, F. Scott Fitzgerald, and Agatha Christie. So is the children’s book author, Avi.

Fast-forward through many years that included a move to New York City and years of teaching and you’ll find me writing my first novel. I was surprised to discover that I liked making up stories and writing them down. I liked it so much that I became a full time writer. Besides novels for children and young adults, I’ve told stories through scripts for television and the movies.

I believe that being dyslexic has helped me as a writer. Since learning to read and write was difficult for me growing up, I paid more attention to the world around me. I watched and listened carefully to people for clues to what people were thinking and feeling. Today, as an author, it is easy for me to imagine what it would be like to be in someone else’s shoes. Understanding how other people feel is a key to being a good writer. I also have strong visual memories and can easily imagine the places I’ve been as I describe them for the reader. These skills are more important for me as a storyteller than the skills I don’t have because I am dyslexic – like being a good speller and a speedy reader.

The story in MY NAME IS BRAIN BRIAN follows Brian’s adventures, friendships, and family life before and after he learns that he is dyslexic. By the end of the story he realizes that the mistake he made spelling his name on the board the first day of sixth grade is true. He is a Brain. 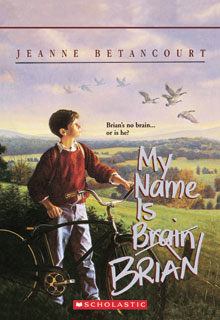 Anna, in the Pony Pals, is also dyslexic. In every Pony Pal story I remind my readers that Anna is dyslexic. Because of her problems with reading and writing, she doesn’t like school as much as Pam and Lulu. Also, when they write their ideas for solving Pony Pal Problems, Anna draws hers. Like many dyslexics, she has artistic talent. Anna’s dyslexia is a big part of the plot for #2: A PONY FOR KEEPS and #38: PONIES ON PARADE. 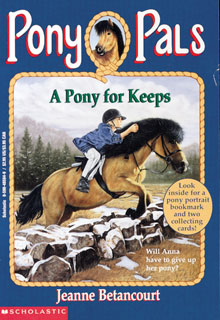 My Name Is Brain Brian “Betancourt weaves in a good deal of information on this learning disability (dyslexia), but first and foremost this is a story. Brain, who narrates, is characterized by more than his problem… (readers) will close the book with a sigh of satisfaction. It is written clearly and simply, with an obvious understanding of, and empathy for, Brian.”

My Name Is Brain Brian “…a skillfully structured, entertaining story; Brian himself, struggling to redefine himself in terms of his newly discovered potential, is drawn with real insight.”

A Pony For Keeps “This was the second Pony Pals book that my daughter (age 7) and I read together, and I found it to be an impressive book. Not only is it entertaining for young readers, but it also provides an age appropriate discussion of learning disabilities. Anna is struggling with her school work, and her parents have decided that her pony is too much of a distraction. Since she can't seem to improve her grades, they decide to return her pony to the stable. By chance, Anna makes a new friend who teaches her about dyslexia, and suggests that Anna might have a similar learning disability. With the help of her friends, Anna is able to convince her parents that she has been doing her best, and that she needs extra help. This story has a happy ending, and it should help young readers understand a bit about learning disabilities. A wonderful combination.”